The connection between the Qabalistic Tree of Life and the Tarot trumps appears to have been first published by French author Eliphas Levi in 1855, who elaborated in turn upon the ideas of Etteilla. 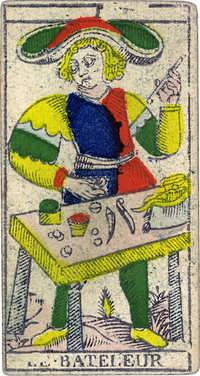 When Éliphas Lévi brought forth the second volume of his two-part Dogme et Rituel de la Haute Magie, he applied the sequence of the Tarot de Marseilles trumps to the Hebrew alphabet in its traditional order, but he placed the Fool just before the final numbered trump, on the second-last Hebrew letter. Either he did not understand Court de Gébelin’s intention to invert the sequence of trumps, or as seems more likely, he chose to ignore it, or was under oath not to reveal it. He was convinced that the posture of the upper body of the Juggler defined the shape of the first Hebrew letter, Aleph, writing “His body and arms constitute the letter Aleph.” This cannot be denied, but since few, if any, of the other figures on the cards resemble their Hebrew letters, its significance is questionable.
Levi makes no open mention of Sepher Yetzirah attributions.


"The Trumps are numbered in Roman figures in order to avoid confusion with the Arabic numbers of the Sephiroth. It has puzzled the traditional writers on the Tarot that these numbers should run from 0 to XXI. They seem to have thought that it would be proper to assume that 0 was the Fool, because he was a cipher, a good-for-nothing. They made this assumption simply because they did not know the secret doctrine of the Qabalistic Zero. They did not know elementary Mathematics. They did not know that mathematicians begin the decimal scale with Zero. To make it quite clear to initiates that they did not understand the meaning of the card called The Fool, they put him down between Atu cards XX and XXI, for what reason it baffles the human imagination to conceive. They then attributed the card number I, the Juggler, to the letter Aleph.
In this simple yet ingenious manner they got the attribution of every card, except XXI, The Universe, wrong."

-- Aleister Crowley
The important thing to notice is the attribution of these cards to the Proper LETTERS of the Hebrew Alphabet, without which, all our work is awry. The cards as they are found in the pack are NUMBERED from I to XXI in Roman Numerals the remaining Trump being marked “0” or sometimes it is unnumbered.

For reasons ranging from a pledge of secrecy to gross ignorance, this Unnumbered Card has usually been placed anywhere but in the obvious position PRIOR TO NUMBER ONE, with the result that the Card Marked I, viz.: - “The Magician, ” has been attributed to Aleph and so on down the line, until the un-numbered card The Fool, was given a place. This slight change was enough to confuse the Student and prevent him from reaping the harvest of Symbolism from the Study of the Correspondences of the Tarot and Holy Qabalah, and, as we shall see later on when it comes to the question of “Climbing the Tree,” it may be considered as almost criminally misleading.

--Frater Achad, QBL
S. L. MacGregor Mathers also maintained Eliphas Levis sequence in his 1888 treatise 'the Tarot';
1. The Juggler or Magician. Before a table covered with the appliances of his art stands the figure of a juggler, one hand upraised holding a wand (in some packs, a cup), the other pointing downwards. He wears a cap of maintenance like that of the kings, whose wide brim forms a sort of aureole round his head. His body and arms form the shape of the Hebrew letter Aleph, to which this card corresponds. He symbolises Will.

2. The High Priestess, or Female Pope. A woman crowned with a high mitre or tiara (her head encircled by a veil), a stole (or a solar cross) upon her breast, and the Book of Science open in her hand. She represents Science, Wisdom, or Knowledge.

3. The Empress. A winged and crowned woman seated upon a throne, having in one hand a sceptre bearing a globe surmounted by a cross, while she rests the other upon a shield with an eagle blazoned therein on whose breast is the cross. She is the Symbol of Action, the result of the union of Science and Will.

4. The Emperor. He is crowned (and leaning against a throne, his legs form a cross, and beside him, beneath his left hand, is a shield blazoned with an eagle). In his right hand he bears a sceptre similar to that of the Empress. His body and arms form a triangle, of which his head is the apex, so that the whole figure represents a triangle above a cross. He represents Realisation.

5. The Hierophant or Pope. He is crowned with the papal tiara, and seated between the two pillars of Hermes and of Solomon, with his right hand he makes the sign of esoterism, and with his left he leans upon a staff surmounted by a triple cross. (Before him kneel two ministers.) He is the symbol of Mercy and Beneficence.

6. The Lovers. This is usually described as representing Man between Vice and Virtue, while a winged genius threatens Vice with his dart. But I am rather inclined to the opinion that it represents the Qabalistical Microprosopus between Binah and Malkuth (see my Kabbalah Unveiled), while the figure above shows the Influence descending from Kether. It is usually considered to mean Proof or Trial; but I am inclined to suggest Wise Disposition as its signification.

7. The Chariot. This is a most complicated and important symbol, which has been restored by Eliphas Levi. It represents a Conqueror crowned and bearing a sceptre, riding in a cubical chariot, surmounted by four columns and a canopy, and drawn by two horses, one of which looks straight forward, while the other turns his head towards him. (Two wheels are shown in the complete single-headed figure.) It represents Triumph, and Victory of Justice and Judgment.

8. Justice. A woman crowned and seated on a throne (between two columns), holding in her right hand an upright sword, and in her left the scales. She symbolises Equilibrium and Justice.

9. The Hermit. An old and bearded man wrapped in a mantle, and with his head covered with a cowl, bearing in his right hand the lantern of occult science, while in his left he holds his magic wand half hidden beneath his cloak. He is Prudence.

10. The Wheel of Fortune. A wheel of seven spokes (the two halves of the double-headed cards make it eight spokes, which is incorrect) revolving (between two uprights), On the ascending side is an animal ascending, and on the descending side is a sort of monkey descending; both forms are bound to the wheel. Above it is the form of an angel (or a sphinx in some) holding a sword in one hand and a crown in the other. This very complicated symbol is much disfigured, and has been well restored by Levi. It symbolises Fortune, good or bad.

11. Strength or Fortitude. A woman crowned with crown and cap of maintenance, who calmly, and Without effort, closes the jaws of a furious lion. She represents Strength.

12. The Hanged Man. This extraordinary symbol is almost unintelligible in the double-headed cards. Properly, it represents a man hung head downwards from a sort of gibbet by one foot (his hands are bound behind his back in such a manner that his body forms a triangle with the point downwards), and his legs a cross above it. (Two sacks or weights are attached to his armpits.) He symbolises Sacrifice.

13. Death. A skeleton armed with a Scythe (wherewith he mows down heads in a meadow like grass). He signifies Transformation, or Change.

14. Temperance An angel with the sign of the Sun on her brow Pouring liquid from one vessel into another. She represents Combination.

15. The Devil. A horned and winged demon with eagle's claws (standing on an altar to which two smaller devils are bound by a collar and cord). In his left hand he bears a flame-headed sceptre. He is the image of Fate or Fatality, good or evil.

16. The Lightning-struck Tower. A Tower whose Upper part is like a crown, struck by a lightning-flash. (Two men fall headlong from it, One of whom is in such an attitude as to form a Hebrew letter Ayin.) Sparks and debris are falling. It shows Ruin, Disruption.

17. The Star. A nude female figure pours water upon the earth from two vases. In the heavens above her shines the Blazing Star of the Magi (surrounded by seven others), trees and plants grow beneath her magic influence (and on one the butterfly of Psyche alights). She is the star of Hope.

18. The Moon. The moon shining in the heavens, drops of dew falling, a wolf and a dog howling at the Moon, and halted at the foot of two towers, a path which loses itself in the horizon (and is sprinkled with drops of blood, a crayfish emblematic of the sign Cancer, ruled over by the Moon, crawls through water in the foreground towards the land). It symbolises Twilight, Deception, and Error.

19. The Sun. The Sun sending down his rays upon two children, who suggest the sign Gemini. (Behind them is a low wall.) It signifies Earthly Happiness.

20. The Last Judgment. An Angel in the heavens blowing a trumpet, to which a standard with a cross thereon is attached. The Dead rise from their tombs. It signifies Renewal, Result.

0. The Foolish Man. A man with a fool's cap, dressed like a jester, with a stick and bundle over his shoulder. Before him is the butterfly of pleasure luring him on (while in some packs a tiger, in others a dog, attacks him from behind). It signifies Folly, Expiation.

21. The Universe. Within a flowery wreath is a female figure nude save for a light scarf. She represents Nature and the Divine Presence therein. In each hand she should bear a wand. At the four angles of the card are the four cherubic animals of the Apocalypse. Above, the Eagle and the Man; below, the Lion and the Bull. It represents Completion, Reward.

Thus the whole series of the twenty-two trumps will give a connected sentence which is capable of being read thus:--The Human Will (1) enlightened by Science (2) and manifested by Action (3) should find its Realisation (4) in deeds of Mercy and Beneficence (5). The Wise Disposition (6) of this will give him Victory (7) through Equilibrium (8) and Prudence (9), over the fluctuations of Fortune (10). Fortitude (11), sanctified by Sacrifice of Self (12), will triumph over Death itself (13), and thus a Wise Combination (14) will enable him to defy Fate (15). In each Misfortune (16) he will see the Star of Hope (17) shine through the twilight of Deception (18); and ultimate Happiness (19) will be the Result (20). Folly (0), on the other hand, will bring about an evil Reward (21).