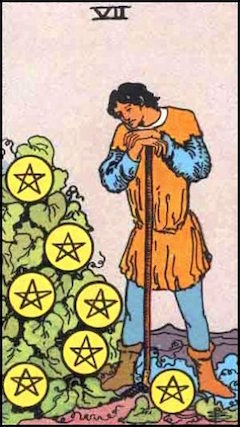 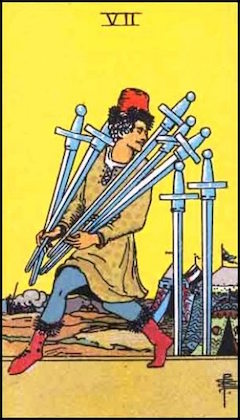 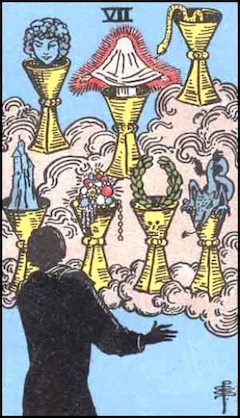 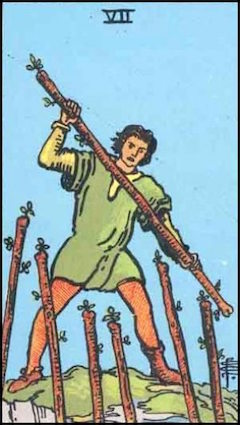 These cards are attributed to Netzach. The position is doubly unbalanced; off the middle pillar, and very low down on the Tree. It is taking a very great risk to descend so far into illusion, and, above all, to do it by frantic struggle. Netzach pertains to Venus; Netzach pertains to Earth; and the greatest catastrophe that can befall Venus is to lose her Heavenly origin. The four Sevens are not capable of bringing any comfort; each one represents the degeneration of the element. Its utmost weakness is exposed in every case.

The Seven of Wands is called Valour. Energy feels itself at its last gasp; it struggles desperately, and may be overcome. This card brings out the defect inherent in the idea of Mars. Patriotism, so to speak, is not enough.

The Seven of Cups is called Debauch. This is one of the worst ideas that one can have; its mode is poison, its goal madness. It represents the delusion of Delirium Tremens and drug addiction; it represents the sinking into the mire of false pleasure. There is something almost suicidal in this card. It is particularly bad because there is nothing whatever to balance it-no strong planet to hold it up. Venus goes after Venus, and Earth is churned into the scorpion morass.

The Seven of Swords is called Futility. This is a yet weaker card than the Seven of Wands. It has a passive sign instead of an active one, a passive planet instead of an active one. It is like a rheumatic boxer trying to "come back" after being out of the ring for years. Its ruler is the Moon. The little energy that it possesses is no more than dream-work; it is quite incapable of the sustained labour which alone, bar miracles, can bring any endeavour to fruition. The comparison with the Seven of Wands is most instructive.

The Seven of Disks is called Failure. This suit gives the extreme of passivity; there is no positive virtue in it below the Abyss. This card is ruled by Saturn. Compare it with the three other Sevens; there is no effort here; not even dream; the stake has been thrown down, and it is lost. That is all. Labour itself is abandoned; every thing is sunk in sloth.