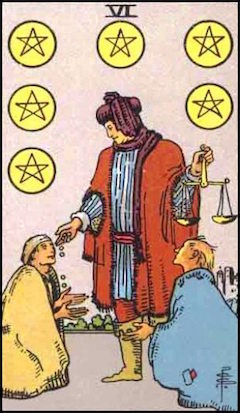 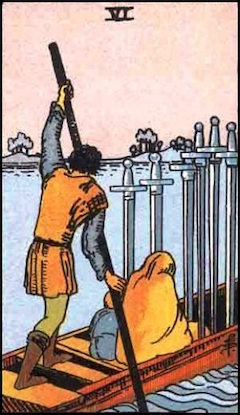 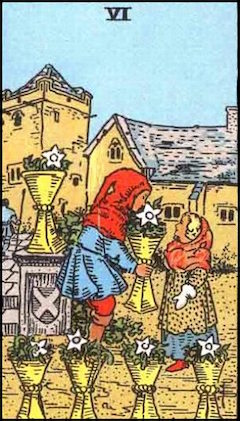 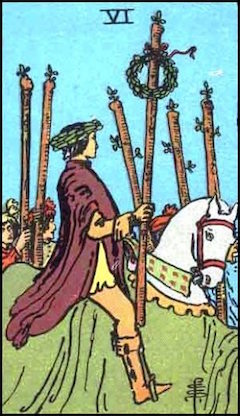 These cards are attributed to Tiphareth. This Sephira is in some respects the most important of all. It is the centre of the whole system; it is the only Sephira below the Abyss which communicates directly with Kether. It is fed directly from Chokmah and Binah; also from Chesed and Geburah. It is thus admirably fitted to dominate the lower Sephiroth; it is balanced both vertically and horizontally. In the planetary system it represents the Sun; in the system of Tetragrammaton it represents the Son. The entire geometrical complex of the Ruach may be regarded as an expansion from Tiphareth. It represents consciousness in its most harmonized and balanced form; definitely in form, not only in idea, as in the case of the number Two. In other words, the Son is an interpretation of the Father in terms of the mind.

The four Sixes are thus representative of their respective elements at their practical best.

The Six of Wands is called Victory. The outburst of energy in the Five of Wands, which was so sudden and violent that it even gave the idea of strife, has now completely won success. The rule, or lordship, in the suit of Wands is not quite as stable as it might have been if there had been less energy displayed. So, from this point, as soon as the current leaves the middle pillar, the inherent weakness in the element of Fire (which is this: that, for all its purity, it is not completely balanced) leads to very undesirable developments.

The Six of Cups is called Pleasure. This pleasure is a kind of pleasure which is completely harmonized. The zodiacal sign governing the card being Scorpio, pleasure is here rooted in its most convenient soil. This is pre-eminently a fertile card; it is one of the best in the pack.

The Six of Swords is called Science. Its ruler is Mercury, so that the element of success turns away from the idea of division and quarrel; it is intelligence which has won to the goal.

The Six of Disks is called Success; the ruler is the Moon. This is a card of settling down; it is very heavy, wholly lacking in imagination, yet somewhat dreamy. Change is soon coming upon it; the weight of earth will ultimately drag the current down to a mere eventuation of material things. Yet the Moon, being in Taurus, the sign of her exaltation, the best of the Lunar qualities are inherent. Moreover, being a Six, the solar Energy has fertilized her, creating a balanced system for the time being. The card is worthy of the name Success. Remember only that all success is temporary; how brief a halt upon the Path of Labour.