GD Folio 32: note the correspondences:
XI Strength/Leo on Teth path 19
VIII Justice/Libra on Lamed path 22
Included in the esocteric teachings decyphered in the foundational cypher manuscripts of the Golden Dawn, was an authoritative determination that the Fool be placed as the first of the Tarot trumps, before the Juggler, (which in the Golden Dawn Tarot was called the Magician). This advanced all the other Trump associations by one letter, (ex, the Magician now being attributed to Beth, instead of Aleph), which puts the imagery of cards into near perfect alignment with their various zodiacal and elemental attributions as given in the Sepher Yetzirah, save for one more exception to the sequence.

The secret of the initiated interpretation, which makes the whole meaning of the Trumps luminous, is simply to put the card marked “0” in its natural place, where any mathematician would have put it, in front of the number One.
But there is still one peculiarity, one disturbance in the natural sequence. For the card XI is called “Strength”; on it appears a Lion, and it quite evidently refers to the zodiacal sign Leo, whereas the card VIII is called “Justice”, and represents the conventional symbolic figure, throned, with sword and balances, thus obviously referring to the zodiacal sign of Libra, the Balance. These cards, VIII and XI, have to be counterchanged.
As soon as one possesses the true attributions of the trumps, the Tarot leaps into life. One is intellectually knocked down by the rightness of it. All the difficulties created by the traditional attributions, as understood by the ordinary scholar, disappear in a flash.
For this reason, one is inclined to credit the claim for the promulgators of the cipher manuscript, that they were guardians of a tradition of Truth. 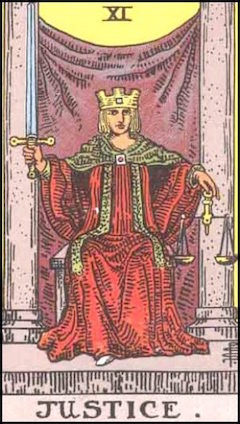 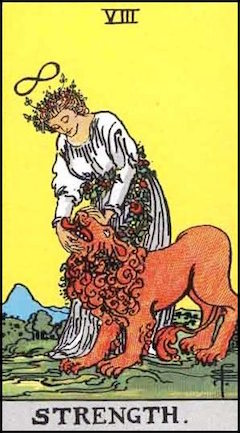 If the Tarot trumps were simply applied in order to the Hebrew letters, with 0 the Fool on the first letter, then VIII Justice would fall on the letter Teth, and XI Strength would fall on the letter Lamed. In the correspondence between the Simple letters and the zodiac signs that is given in Sepher Yetzirah, this would put the sign Leo on the trump Justice, and the sign Libra on the trump Strength.
But there is an obvious problem. Leo is the sign of the lion, a beast symbolic of virility and strength, and Libra is the sign of the scales, the primary symbol of justice. The trump Strength shows in its picture a lion, and the trump Justice shows in its picture a set of scales.

It was obvious to Mathers, and indeed would be obvious to almost anyone, that it would be more appropriate to link the trump Justice with Libra, and the trump Strength with Leo. How could he do this? The Hebrew letters could not be inverted. The associations of the zodiac signs with the Simple letters could not be changed, since they are quite explicit in Sepher Yetzirah. The only thing to do was to invert the titles & ATU images of Justice and Strength. This corrected the obvious error in symbolism on these two trumps.
This is the sequence used in the Rider-Waite deck.

However, it's worth noting that in the Golden Dawn's foundational 'Cipher Manuscript', although the astrological and Hebrew attributions of these two trumps are counterchanged, the cards original Roman numbers are preserved, keeping Justice as VIII and Strength as XI.