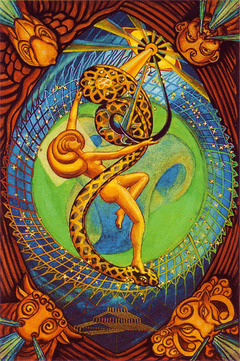 The matter of the question itself, synthesis, the end of the matter, may mean delay, opposition, obstinacy, inertia, patience, perseverance, persistent stubbornness in difficulty. The crystallization of the whole matter involved.

The Great One of the Night of Time

The first and most obvious characteristic of this card is that it comes at the end of all, and is therefore the complement of the Fool. It is attributed to the letter Tau. The two cards together accordingly spell the word Ath, which means Essence. All reality is consequently compromised in the series of which these two letters form the beginning and the end. This beginning was Nothing; the end must there fore be also Nothing, but Nothing in its complete expansion, as previously explained. The number 4, rather than the number 2, was chosen as the basis of this expansion, partly no doubt for convenience, to enlarge the "universe of discourse"; partly to emphasize the idea of limitation.

The letter Tau means the Sign of the Cross, that is, of extension; and this extension is symbolized as four-fold because of the convenience of constructing the revolving symbol of Tetragrammaton. In the case of the number 2, the only issue is the return to the unity or to the negative. No continuous process can be conveniently symbolized; but the number 4 lends itself, not only to this rigid extension, the hard facts of nature, but also to the transcendence of space and time by a continuously self-compensating change.

The letter Tau is attributed to Saturn, the outermost and slowest of the seven sacred planets; because of these dull, heavy qualities, the element of earth was thrust upon the symbol. The original three elements, Fire, Air, Water, sufficed for primitive thought; Earth and Spirit represent a later accretion. Neither is to be found in the original twenty-two Paths of the Sepher Yetzirah. The world of Assiah, the material world, does not appear except as a pendant to the Tree of Life.

In the same way, the element of Spirit is attributed to the letter Shin, as an additional ornament, somewhat in the same way as Kether is said to be symbolized by the topmost point of the Yod of Tetragrammaton. It is constantly necessary to distinguish between the symbols of philosophical theory and those more elaborate symbols based upon them which are necessary in practical work.

Saturn and Earth have certain qualities in common-heaviness, coldness, dryness, immobility, dullness and the like. Yet Saturn appears in Binah in respect of its blackness in the Queen's scale, which is the scale of Observed Nature; but always, as soon as the end of a process is reached, it returns automatically to the beginning.

In Chemistry, it is the heaviest elements that are unable in terrestrial conditions to support the strain and stress of their internal structure; consequently, they radiate particles of the most tenuous character and the highest activity. In an essay written in Cefalù, Sicily, on the second law of Thermo-dynamics, it was suggested that at the absolute zero of the air thermometer, an element heavier than uranium might exist, of such a nature that it was capable of reconstituting the entire series of elements. It was a chemical interpretation of the equation, 0=2.

It becomes then reasonable to argue from analogy that since the end must beget the beginning, the symbolism will follow; hence, blackness is also attributed to the sun, according to a certain long- hidden tradition. One of the shocks for candidates in the "Mysteries" was the revelation "Osiris is a black god".

Saturn, therefore, is masculine; he is the old god, the god of fertility) the sun in the south; but equally the Great Sea, the great Mother; and the letter Tau upon the Tree of Life appears as an emanation from the moon of Yesod, the foundation of the Tree and representative of the reproductive process and of the equilibrium between change and stability, or rather their identification. The influence of the path descends upon the earth, Malkuth, the daughter. Here again appears the doctrine of "setting the daughter upon the throne of the Mother". In the card itself there is consequently a glyph of the completion of the Great Work in its highest sense, exactly as the Atu of the Fool symbolizes its beginning. The Fool is the negative issuing into manifestation; the Universe is that manifestation, its purpose accomplished, ready to return. The twenty cards that lie between these two exhibit the Great Work and its agents in various stages. The image of the Universe in this sense is accordingly that of a maiden, the final letter of Tetragrammaton.

In the present card she is represented as a dancing figure. In her hands she manipulates the radiant spiral force, the active and passive, each possessing its dual polarity. her dancing partner is shown as Heru-Ra-Ha of Atu XIX. "The Sun, Strength & Sight, Light; these are for the servants of the Star & the Snake." This final form of the image of the Magical Formula of the God combines and transforms so many symbols that description is difficult, and would be nugatory. The proper method of study of this card - indeed of all, but of this especially - is long-continued meditation. The Universe, so states the theme, is the Celebration of the Great Work accomplished. In the corners of the card are the four Kerubim showing the established Universe; and about her is an ellipse composed of seventy-two circles for the quinaries of the Zodiac, the Shemhamphorasch.

In the centre of the lower part of the card is represented the skeleton plan of the building of the house of Matter. It shews the ninety-two known chemical elements, arranged according to their rank in the hierarchy. (The design is due to the genius of the late J. W. N. Sullivan: see The Bases of Modern Science.)

In the centre, a wheel of Light initiates the form of the Tree of Life, shewing the ten principal bodies of the solar system. But this Tree is not visible except to those of wholly pure heart.

• The primum mobile, represented by Pluto. (Compare the doctrine of the alpha particles of radium.)
• The sphere of the Zodiac or fixed stars, represented by Neptune.
• Saturn.
• The Abyss. This is represented by Herschel, the planet of disintegration and explosion.
• Jupiter
• Mars.
• The Sun.
• Venus.
• Mercury.
• The Moon.
• The Earth. (The Four Elements).

All these symbols swim and dance in a complex but continuous ambience of loops and whorls. The general colour of the traditional card is subfusc; it represents the confusion and darkness of the material world. But the New Aeon has brought fullness of Light; in the Minutum Mundum, Earth is no longer black, or of mixed colours, but is pure bright green. Similarly, the indigo of Saturn is derived from the blue velvet of the midnight sky, and the maiden of the dance represents the issue from this, yet through this, to the Eternal. This card is to-day as bright and glowing as any in the Pack.

[From The Vision and the Voice, 9th Aethyr]

We are come unto a palace of which every stone is a separate jewel, and is set with millions of moons.

And this palace is nothing but the body of a woman, proud and delicate, and beyond imagination fair. She is like a child of twelve years old. She has very deep eyelids, and long lashes. Her eyes are closed, or nearly closed. It is impossible to say anything about her. She is naked; her whole body is covered with fine gold hairs, that are the electric flames which are the spears of mighty and terrible Angels whose breastplates are the scales of her skin. And the hair of her head, that flows down to her feet, is the very light of God himself. Of all the glories beheld by the Seer in the Aethyrs, there is not one which is worthy to be compared with her littlest finger-nail. For although he may not partake of the Aethyr, without the ceremonial preparations, even the beholding of this Aethyr from afar is like the partaking of all the former Aethyrs.

The Seer is lost in wonder, which is Peace.

And the ring of the horizon above her is a company of glorious Archangels with joined hands, that stand and sing: This is the daughter of BABALON the Beautiful, that she hath borne unto the Father of All. And unto all hath she borne her.

This is the Daughter of the King. This is the Virgin of Eternity. This is she that the Holy One hath wrested from the Giant Time, and the prize of them that have overcome Space. This is she that is set upon the Throne of Understanding. Holy, Holy, Holy is her name, not to be spoken among men. For Kore they have called her, and Malkah, and Betulah, and Persephone.

And the poets have feigned songs about her, and the prophets have spoken vain things, and the young men have dreamed vain dreams: but this is she, that immaculate, the name of whose name may not be spoken. Thought cannot pierce the glory that defendeth her, for thought is smitten dead before her presence. Memory is blank, and in the most ancient books of Magick are neither words to conjure her, nor adorations to praise her. Will bends like a reed in the tempests that sweep the borders of her kingdom, and imagination cannot figure so much as one petal of the lilies whereon she standeth in the lake of crystal, in the sea of glass.

Holy, Holy, Holy art thou, and blessed be thy name for ever, unto whom the Aeons are but the pulsings of thy blood.